Films and their Sites exhibition at Casa Masaccio from November 29 to January 31, 2021

Jean-Marie Straub and Danièle Huillet, films and their sites.
curated by Jean-Louis Raymond and Rita Selvaggio

«​ ​A film is just a school of perception, that’s all. It’s necessary to be aware and modest and know what you’re dealing with. It’s a means of helping people to see and to look, and to see better and feel better »
(Jean-Marie Straub and Danièle Huillet, Incontri, Cineteca di Bologna, 2001)

Casa Masaccio | Centro for l’Arte Contemporanea is delighted to be the first Italian institution to host Jean-Marie Straub and Danièle Huillet: Films and Their Sites. Curated by Jean-Louis Raymond and Rita Selvaggio and aimed at a broader and uninitiated section of the public, one not familiar with the language of such uncompromising cinema, the exhibition presents a mix of documents and testimonies, stills and fragments, study materials, mappings and elective affinities that, in a compelling orchestration, focuses its gaze on the disquiet of the human condition.
The cinema of Jean-Marie Straub (1933) and Danièle Huillet (1936-2006) has traversed the 20th century, its conflicts and its impossible utopias, raising questions that remain without answers, apart from that of an image and a line of formal research that stems from and has been developed in a rigorous way out of an examination of the structures and the unexpected aspects of reality in all its semantic and perceptual complexity. The profound materiality of this cinema of theirs, a cinema of the essential that sets the images in a concrete political habitat, is made up of sounds recorded live and of faces, but also of earth, water and rocks, of air and wind, of nature that is both material and mystery.

What for much of the international film industry would simply fall into the category of documentation (an image extracted as a record, for information) becomes, in the case of Danièle Huillet and Jean-Marie Straub, a new means of access to one of the essential aspects of their work: the frame.
The Straubs’ frame entails time. It is located in the duration of the images. Its precision, suited to capturing movement, opens up a space that allows the viewer’s inclusion in a unique experience, renewed each time, in a place whose principal analogy is with the painted picture.
These individual frames are conveyed totally by the stills and, in alluding directly to the films, reveal simultaneously their potent autonomy and their expressive force. It is their fundamentally plastic quality that has guided the initial conception of this exhibition.
The Straubs’ work is exemplary for its engagement in an art form nourished by the history of the arts. Cinema, painting and, at the centre, literature, music and the theatre are the sources of the whole of their work. Their determination and political will underlie each of their choices, in an incessant exploration of the mysteries of human societies, in search of an emancipated, poetic community. From faces to landscapes, from bodies to buildings, it is left to us to investigate an active memory of beings and the world.
The exhibition testifies to this in full. It is intended for a public of enthusiasts or the uninitiated. Far from being inescapable for the discovery and appreciation of their work, it should be seen as an approach that fosters reflection and questioning; a time devoted to understanding how much each of these images is ‘metonymically’ impregnated with the film from which it has been extracted.

The exhibition Jean-Marie-Straub et Danièle Huillet. Films and Their Sites, was conceived and organized by Pascal Kern, Jean-Louis Raymond and Servane Zanotti, at the suggestion of Dominique Païni, in the framework of the programme of research at the École Supérieure des Beaux-Arts in Le Mans (ESAD TALM). It was initially staged at the ESBAM in November 1999, contemporaneously with the release of Sicilia! in cinemas, and opened in the presence of Jean-Marie Straub and Danièle Huillet (1936-2006). Subsequently it has been put on at the Centre National de la Photographie in Paris (2000), the French Embassy in Rome and the Locarno Film Festival, the Médiathèque in Metz (2002), the contemporary art centre of Villa Arson, Nice (2004), the École d’Art de Grenoble (2012) and in 2016 the Miguel Abreu Gallery in New York.

Project carried out as part of the initiative Toscanaincontemporanea2020.

More details and virtual visit of the exhibition:
http://www.casamasaccio.it/jean-marie-straub-e-daniele-huillet/ 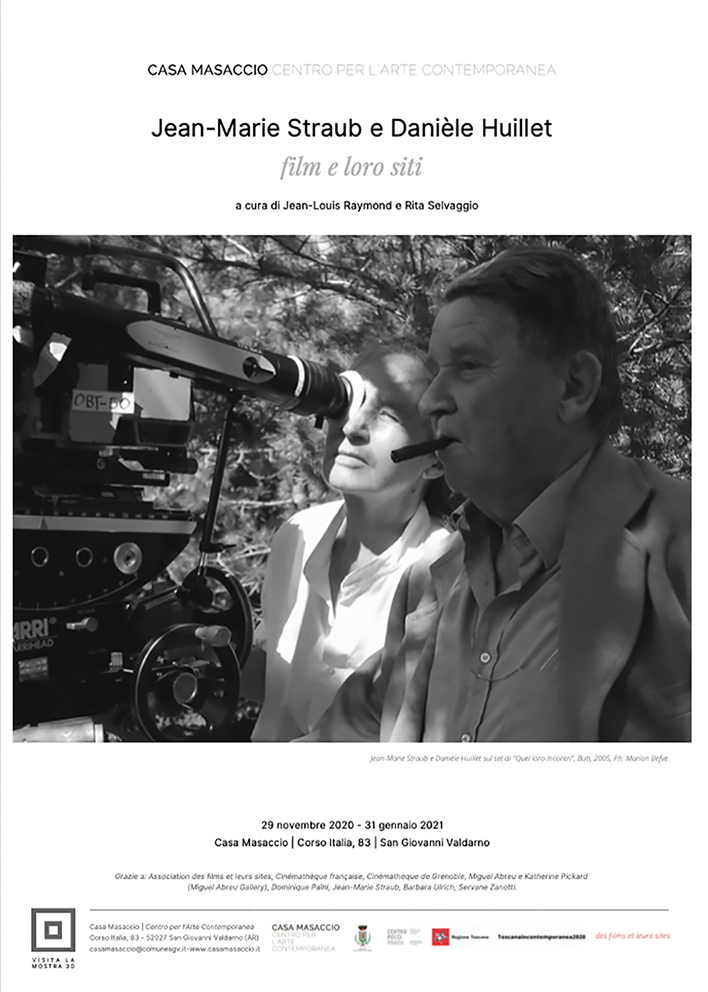