“November 1954, arrival in Paris with the project for a film-biography”, Jean-Marie Straub wrote in the CURRICULUM of 1966. Danièle Huillet, recalling when they met, said in a radio interview that she looked at him sitting in the metro and thought to herself that with all he wanted to do, it would take at least the two of them together.

This project marked the beginning of both the Straubs’ love story that lasted more than 50 years and an ongoing body of work. For them, it retained the importance and emotional charge of a first and groundbreaking film. From 1956 until the film was made, they spent eleven years struggling and waiting, but with the certitude of creating something that had never existed before.

Johann Sebastian Bach, 1685 – 1750. The innovative idea was music as aesthetic subject matter and as true protagonist of the film, thus the necessity of creating for it the most authentic possible conditions, both spatial and artistic. This was what spurred the Straubs’ travels in the two Germanys to find locations, and what motivated their archive research. This innovative idea in film was exactly the same as the innovative idea in music developed at the same time by Nikolaus Harnoncourt and Gustav Leonhardt: playing music on the instruments for which it had been written; limiting the performers to the number of musicians customary for Bach.

In retrospect, it seems self-evident that these artists, unknown at the time, would be part of the Straub project from the beginning, as was August Wenzinger, their senior and precursor from the Schola Cantorum Basiliensis, whose name history remembers less.

Although eleven years had elapsed between the first contacts and the making of the film, and although all parties had gone on with their lives in the interim, every one of them was there, with their ensembles and students, for shooting in the fall of 1967.

On the occasion of the 45th anniversary of Chronik der Anna Magdalena Bach – and Jean-Marie Straub’s 80th birthday! – Les EDITIONS MONTPARNASSE and Les EDITIONS OMBRES/BELVA FILM released the BACHFILM box set at the beginning of 2013. BACHFILM, which collects for the first time all the original versions of the film and includes a large number of documents, previously unpublished for the most part, is testimony, however humble, to this human and artistic adventure.

Some of these documents are in French only in the box set. Here they are translated into English. Thanks to Barton Byg, Misha Donat, Wimba Glasgow, David Kern, Sally Shafto and Evan Torner. And Cornelia Geiser for transcription.

Copyright by the authors.
For any question: straubhuillet@bluewin.ch
Translation Wimba Glasgow

(Les Editions Montparnasse has published the historical films of Danièle Huillet and Jean-Marie Straub as well as Jean-Marie Straub’s more recent films, 1962 – 2012, in seven volumes to date. All of them, and the BACHFILM box set, are available atwww.editionsmontparnasse.fr) 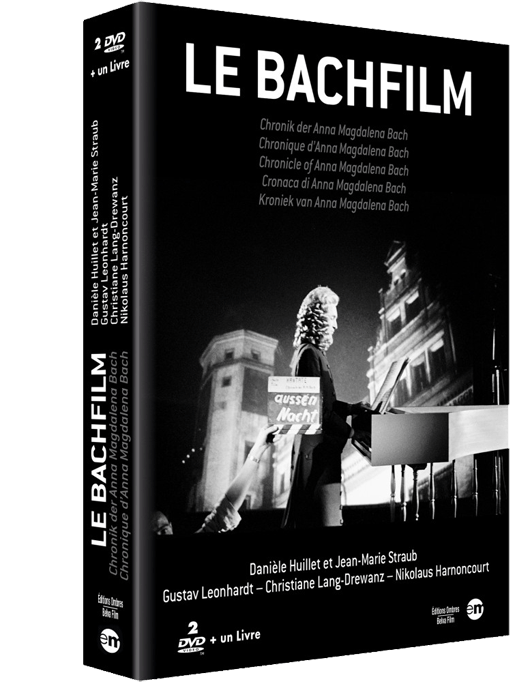